Updated: 2019 Career data comes from the most recent BLS publication. Education information comes from schools, credentialing and accrediting organizations and is subject to change.

If you have ever gone to an emergency room or clinic and had an x-ray, you more than likely interacted with an Imaging Technician (Image Tech).

There are different types of Imaging Technologists such as Radiologic technologist (also known as Rad Tech or radiographers and specialize in x-ray technology) and MRI technologists (Magnetic Resonance Imaging).

X-ray technology is also used to pre-diagnose an issue before it is life-threating such as cancer. The Image Tech is responsible for making sure the equipment and patient are set up in a room and take a precise image of the area referred to by the physician.

There are several types of equipment that take detailed images and the technology is constantly improving such as Radiography (x-rays), Fluoroscopy (patient ingests dyes), and CT (Computed Tomography i.e., CAT scans). CAT scans are the machines that typically are a long tube you lay down inside and the equipment moves around your whole body.

These devices also a produce low levels of harmful ionizing radiation, but most believe the benefits far out way the risks. Other safer equipment used are Ultra -Sound and Magnetic Resonance Imaging (MRI) which uses magnetic and radio pulses to produce detailed pictures and do not use radiation.

Global wellness is a $4 trillion industry and the global imaging market is $48 billion and growing with about 11,900 Imaging Centers in the U.S. The Bureau of Labor (BLS) predicts 23,300 new Medical Imaging technician jobs by 2028 growing at 9% making it a much faster than average growth market.

According to the BLS, the average wage for a Medical Imaging technician is $61,240 annually with a Radiologic Technician starting out lower and MRI Technicians paid higher.

Both of these professions are considered to be Imaging Technicians experts both typically require an associate degree from an accredited college or trade school. Oddly, most MRI techs start out as Radiologic Techs and most states require licensed Radiologic techs to be licensed but don’t require MRI tech to be licensed even though an MRI Tech is typically paid more and are not exposed to radiation.

A Radiologic Technician uses technology that produces high contrast film of bones and skeletal structures typically used to detect fractured or broken bones. The Radio Tech is supervised by a certified radiologist or physician and is also responsible for preparing the imaging room for the referred patient to meet the needs of the patient’s specific issue.

MRI Technicians are trained to use MRI technology and equipment. These machines are a large tube the patient lies down inside tube. Once the patient is in place, the Tech turns on the wave and magnetic functions that begin creating an image of the patient. This process takes several minutes. An MRI specialist performs under the supervision of a certified radiologist and are trained in MRI exams, pulse sequences, and image production among other functions.

Qualified candidates get their certification from taking the American Registry of Radiologic Technologists (ARRT) exam. Because of the potential exposure to radiation, most states require that Radiologic Technologist be trained and licensed and many states use the scores from the ARRT examination to help make licensing decisions. In order to take the credential exam, some states require the disclosure of any history of felonies or misdemeanors.

Regulations can change from year to year so be sure to check with your state for requirements. In 2019, there were still 8 states that DO NOT require licensing

A typical Diagnostic Medical Imaging school curriculum is 63 credit hours of school and have no less than C in each class. In 2019, there were 449 2-year colleges and 262 4-year colleges that offered a Medical Radiologic Technology program. the U.S. Department of Education recognizes the Joint Review Committee on Education in Radiologic Technology (JRCERT) as the accreditation standard used by higher education. If choosing to go into the Medical Imaging field, make sure it is an accredited school. For MRI and other Imaging specialties, more classroom time will be required.

Tuition costs will vary at different universities depending on factors such as living in state or out of state, public or private school and how long it takes you to finish. One sample state college estimated taking 15 hours in one semester including tuition, books and supplies only (no room and board, transportation, and other miscellaneous fees) would be about $4,000 and a non-resident about $20,000 for the same semester.

A typical associates degree program would be similar to the following:

The Bureau of Labor Statistics (BLS) has detailed statistics on role which vary state by state but the median average salary for Medical Radiologic and MRI Imaging technician is $61,240 per year.

Several factors determine the final salary or wage of a Medical Imaging technician including specialization within a field, experience, and geography to name a few. The areas with a higher cost of living tend to pay above average.

The top five highest paying states according to the BLS are:

Job growth for Imaging technician is growing as the aging Baby Boomers are have an increase in medical conditions that require imaging for physicians to make a diagnosis.

The need for Medical Imaging technician is in every state but some areas have more need and are willing to pay more to start.

The top five states with the most jobs according to BLS are:

In addition to the hospitals and doctor offices across the world who have imaging technology, many specialty clinics in imaging are setting up shops in areas of need.

A typical job description for a Medical Imaging technician is:

What Are Some Personal Traits That Are helpful?

Medical Imaging technicians play a critical role in aiding the physician to diagnose injury or other health issues. The aging population is more dependent than ever on a Medical Imaging diagnosis to efficiently understand and maintain their health and reduce health related diseases. Here are some traits that can help you succeed:

If you love the challenges and are passionate about health, an Imaging Technicians maybe the career that will be fulfilling for you. Click the blue “Find Schools” button to view colleges and universities that may fit your needs. 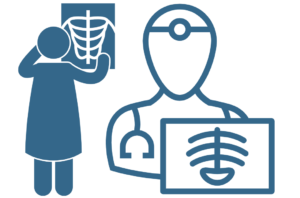 Search, compare, and even get matched to the best medical imaging program for you.